Most unicycles use 16 LiIon battery cell packs. There are a few variants, InMotion battery has 18 cells, Pinwheel uses Lipo batteries, first generation Solowheels have LiFePo batteries, so the thresholds listed below are to be adapted but the operating principle remains unchanged.

All batteries have a BMS board (battery management system) to manage the cells, especially to balance the voltages of 16 cells and to automatically shut off charging current to prevent overcharge. A large majority of BMS also features overdischarge protection by cutting off power (without warning !!!), a horribly faulty design responsible for countless accidents, sometimes serious, see this blog’s BMS many articles.

Note that according to Shane Chen himself, Solowheel’s founder and popularizer of the electric unicycle concept, his BMS never cuts off power during a ride (vital requirement for an unicycle!). If the battery has a problem, the BMS just reports it to the mainboard thanks to a dedicated signal wire, the only reasonnable thing to do.

To double the capacity of a 16S1P battery pack, an additional cell is welded in parallel to each existing cell to make a 16S2P (16 series or 2 parallel cells). Smallexis made such mod for his Airwheel Q3 battery, find it with the “search” button). To triple the capacity, add two cells (16S3P), to quadruple, add 3 cells (16S4P eg on the Firewheel 680Wh). The most common variant is two parallel packs, each with its own BMS, eg two packs 340Wh in parallel to have a capacity of 680Wh (Gotways).

Here are some important values for a ??LiIon pack. They are useful to know to charge & discharge properly, to make a quick diagnosis in case of the wheel’s power supply problem and to monitor battery (inevitable) aging.
Values are for cell and pack (1 pack = 16 cells in series, values ??measured by the Charge Doctor )

(1) the battery may not be destroyed by such a low voltage, it only “takes a hit”. This is a deep discharge state. Avoid at all costs !
(2) this limit is normally never reached because the wheel’s mainboard emits low voltage warnings (buzzer and/or pedals tilt-up) and forces the rider to descend before. If you have this value or lower, then your package has a problem, usually some defective cells.
(4) indicative value, may vary. Use this value to get 50% charge state for storage (a Charge Doctor counting capacity from voltage and current would be much more accurate). The goal is not to store the battery neither full (high voltages tend to stress the cell’s electrolytes separation membrane), nor empty to avoid self-discharge from deeply discharging the battery (see (1)).
(6) after the load, open circuit (no load) voltage tends to sag, especially if the battery is old.
(8) constant voltage charging zone: the charge current gradually decreases. When it is below a few tens of mA, the load is automatically switched off by the BMS. It can also be manually turned off by the user when the red LED on the charger switches to green, which corresponds to a charging current less than 0.25A. At this point, the battery is almost 100%, keeping on charging is unnecessary because only a few Wh would be added.
(8) The voltage at the charging socket (read by the Doctor load) may be 68V due to the BMS’s voltage drop, especially the reverse voltage protection diode. 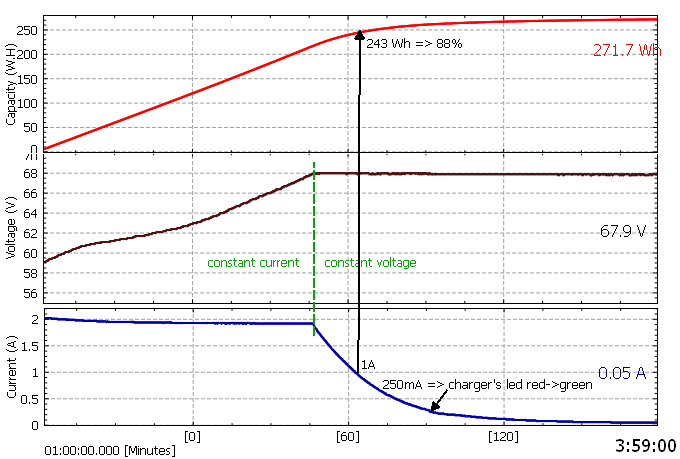 One thought on “How to take care of your unicycle's battery”